Hazards and risks of laser removal of permanent make-up, microblading and tattoos

Today, undesirable tattoos and pigmentations (permanent make-up, microblading) can be removed. What seemed impossible a few years ago is no longer a problem thanks to the modern technologies. The most popular well-known method is the removal of pigments with the LASER. Its operation mode is the following:

The laser beam splits the pigment particles to smaller molecules. Most of them remain in the skin. However, their size is reduced with each treatment by the splitting, and they become so tiny that the human eyes can not really perceive them. The tattoo or pigmentation becomes “invisible” for our eyes. It gives the impression as if the pigments were removed.

A part of splitted pigment particles are excreted by the lymph channels out of the body. But in the course of time, this happens with every pigmentation or tattoo, even without laser action. The smallest particles of color dissolve and leave the body. Therefore, an old tattoo / permanent make-up looks more pale and blurry than in the first time.

The interval between laser treatments is 1.5-2 months. The number of treatments varies and depends on size and density of tattoo / pigmentation. On average, you should expect 5-10 sessions (so the complete laser removal takes about 1-2 years).

The laser removal of pigments is modern and convenient, but there are some risks that one should know. Below we introduce you to some hazards of laser removal.

The fission products resulting from the laser treatment are currently not sufficiently researched. It is only known that they are harmful for health (including carcinogens) and may trigger allergies.

HAZARD NO. 2: BURNES AND SCARS

The main hazard of laser removal for the skin surface is is the risk of permanent scars and burns. When used properly, the laser beam will not damage skin cells, but will selectively affect only color pigments. To do so, the laser device must be set correctly and adapted to the individual skin type. That requires much experience and tact. Setting the laser device incorrectly may cause blistering and burns, which can lead to permanent scars. 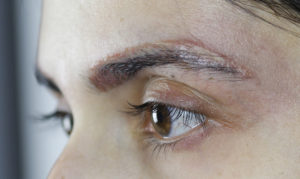 One case in itself is the removal of pigments based on acrylates and similar compounds (they are often used in microblading).

Such pigments can melt under the laser beam in the skin, resulting in internal skin burns and scars (see picture on the left).

In addition, these pigments are often not recognized and removed by the laser. Instead of lightening / removal, damage to the skin structure may occur.

Unfortunately, the clients often do not know which pigments they carry in the skin. This complicates the matter, as one never knows how the tattooed / pigmented body will respond to a laser treatment. Before working on a whole tattoo, a test laser treatment schould be done at a smaller skin area. 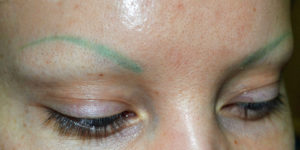 Some colors are not recognized by the laser and consequently not removed.

Or much worse: the pigments are recognized and change their color under the laser beam. This mainly happens to white and beige pigments (titanium oxides). These are often become green or dark gray under the laser beam. Sometimes, they can be decomposed and removed in the following laser treatments. But usually, the changed color can not be removed with laser at all.

Especially the pigments which turned into green, remain permanently in the skin and can only be removed by other methods. Other pigments (mostly those of organic origin) are often not “seen” by the laser. These include many reds, oranges, greens and blues.

Incautious or incorrect handling of the laser device may cause risks to the eyes. Since this application works with wavelengths of optical radiation which reach the retina in the eye, permanent damage to the retina is possible in case of improper handling and lack of eye protection. This is very important for the removal of pigments on the eyelids. The eyes must be very well protected, e.g. through special metal lenses that are placed on the eyeball before treatment.

HAZARD NO. 5: HYPOPIGMENTATION OF THE SKIN

After laser treatment, light spots (hypopigmentation) may remain on the skin. This happens, because the laser affects not only the tattoo pigments in the skin, but also the body’s own pigments.

Hypopigmentations are usually permanent. These skin areas get no more sun tan.

One of the alternatives is the removal of pigments with Remover. More information: Function and Ingredients.
In the remover method, the pigments are removed from the skin in a similar way as they were implanted. They are extracted to the skin surface and do not remain in the body. When used professionally, this method is fast, non-scarring and very effective, as pigments of all types and colors can be removed.

We may request cookies to be set on your device. We use cookies to let us know when you visit our websites, how you interact with us, to enrich your user experience, and to customize your relationship with our website.

Click on the different category headings to find out more. You can also change some of your preferences. Note that blocking some types of cookies may impact your experience on our websites and the services we are able to offer.

These cookies are strictly necessary to provide you with services available through our website and to use some of its features.

Because these cookies are strictly necessary to deliver the website, refusing them will have impact how our site functions. You always can block or delete cookies by changing your browser settings and force blocking all cookies on this website. But this will always prompt you to accept/refuse cookies when revisiting our site.

We fully respect if you want to refuse cookies but to avoid asking you again and again kindly allow us to store a cookie for that. You are free to opt out any time or opt in for other cookies to get a better experience. If you refuse cookies we will remove all set cookies in our domain.

We provide you with a list of stored cookies on your computer in our domain so you can check what we stored. Due to security reasons we are not able to show or modify cookies from other domains. You can check these in your browser security settings.

These cookies collect information that is used either in aggregate form to help us understand how our website is being used or how effective our marketing campaigns are, or to help us customize our website and application for you in order to enhance your experience.

If you do not want that we track your visit to our site you can disable tracking in your browser here:

We also use different external services like Google Webfonts, Google Maps, and external Video providers. Since these providers may collect personal data like your IP address we allow you to block them here. Please be aware that this might heavily reduce the functionality and appearance of our site. Changes will take effect once you reload the page.

The following cookies are also needed - You can choose if you want to allow them: